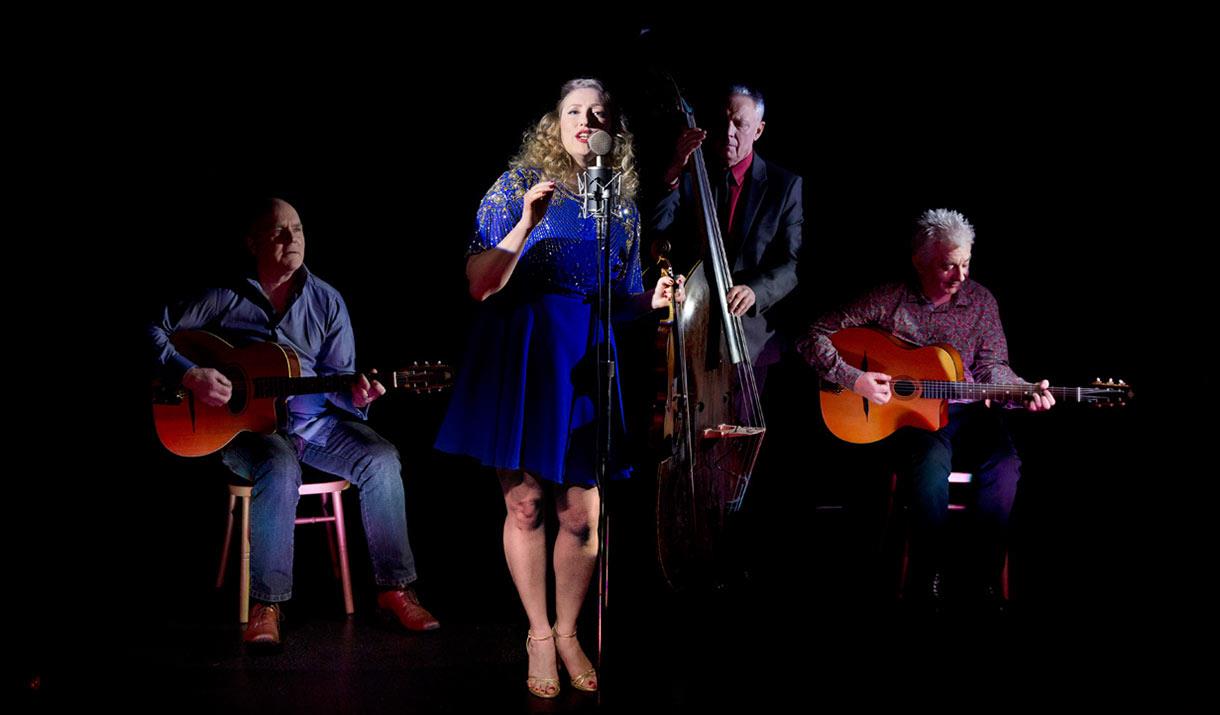 Scottish Jazz Award-winners Rose Room have become one of Scotland's leading ensembles influenced by the Gypsy Jazz genre. Sharing a love of Swing music and the style of the great Django Reinhardt and Stephane Grappelli, their "vigorous and vivacious" performances go "down a storm" with any audience as they serve up their 1930s 'Hot Club' standards, Gypsy Jazz favourites and self-penned originals with virtuosity, verve and panache recreating the excitement of Rive Gauche Paris.
Based in Glasgow, the quartet is fronted by award-winning violinist and "sophisticated songstress" Seonaid Aitken who was voted Scottish Jazz Awards 'Best Vocalist' in 2017 & 2018 and also plays with the Orchestra of Scottish Opera, the Tim Kliphuis Sextet and is presenter of BBC Radio Scotland's 'Jazz Nights'. Scotland's No.1 guitar maker, Jimmy Moon of 'Moon Guitars', features on double bass. Tam Gallagher and Tom Watson (award winners at Celtic Connections) complete the line-up on rhythm and solo guitars respectively.
With three albums recorded to date – 'The High Life' (2015), 'Am I Blue' (2013) and 'Somewhere In Roseland' (2011) – Rose Room have headlined at all of the major Scottish jazz festivals, appeared at the celebrated Shetland Folk Festival, and toured Ireland performing at the Guinness Cork Jazz Festival. Their collaboration with top Scottish saxophonist Konrad Wiszniewski and 'string quartet to the stars', the Capella String Quartet, led to the formation of 'Rose Room Orchestra Fantastique' – a 9-piece ensemble which celebrates the vintage sound of the 1930s.
Rose Room were delighted to have been voted 'Best Band' in the Scottish Jazz Awards 2018, having been finalists in the previous two Scottish Jazz Awards, and are frequently played on BBC Radio Ulster, BBC Radio Scotland's 'The Jazz House' and Jazz FM.
Rose Room are playing at Threlkeld Village Hall on Friday 12th August at 8pm. Bar and Box Office from 7:15pm. Tickets are £15 (£7.50) for under 18s available from Threlkeld Village Hall Coffee Shop, the village PO and on-line at www.threlkeldvillagehall.org/whats-on