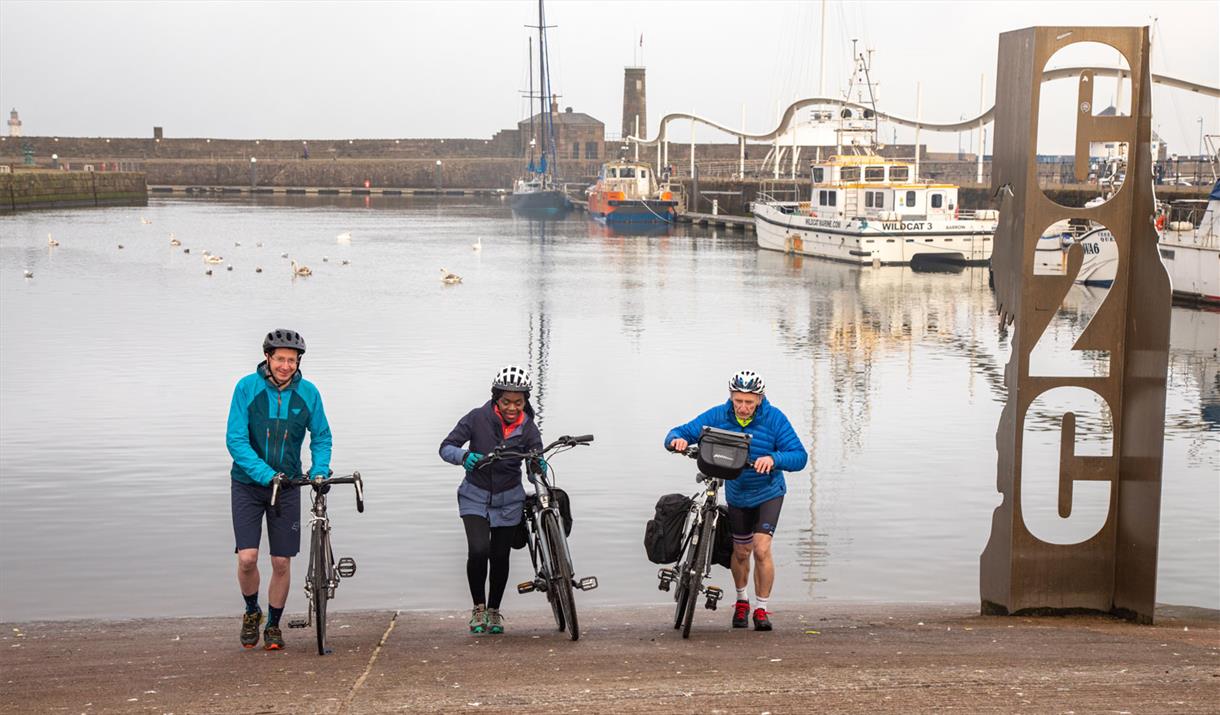 A route of almost 140 miles cross-country, linking Whitehaven or Workington with Sunderland or Newcastle. Mostly on-road but some sections off-road. This is a Sustrans national cycle route.

One of the UK's most popular challenge cycle routes, the C2C is often thought to stand for ‘Coast to Coast’, but the name is actually short for ‘Sea to Sea’.

This classic long distance cycle route takes you over the North Pennines, a route which traverses the North of England taking in 4 counties.The Sea to Sea (C2C) can start at either Whitehaven or Workington, and has two possible endpoints on the North Sea coast in Sunderland or Tynemouth. The recommended direction is west to east to take advantage of the prevailing wind.

The highest point of the C2C at Black Hill (609m) is on the Cumbria/Northumberland border.

Key information about the route:

Route sections from West to East (Whitehaven to Sunderland)

Starting at Whitehaven, the first ten miles of the C2C follows a well made surfaced path. Quiet lanes follow as the route passes through some of the countries most beautiful scenery. Kirkland and Lamplugh reveal the proximity of the Lakes mountains and on the steep descent from Fangs Brow to Loweswater there is a good view of Mellbreaks ahead.The Whinlatter Pass is the first major climb ending in a fine descent on forest roads to Bass Lake and Keswick.

The next section takes the route on to Langwathby in the Eden Valley and has contrasting views and riding surfaces.Some alternate routes are available here, the hardest one crossing Matterdale Common on the Old Coach Road to Greystoke, Blencow and Penrith, reaching Langwathby on the Eden. At this point a third of the ride is now complete, leaving behind the hills of the Lakes, with the Pennine crossing to come.

This is the most mountainous part of the route with four major climbs in 20 miles.The first encountered climb (and the steepest) is Hartside at 580 metres; this is the watershed between the Irish Sea and the North Sea. It’s not all downhill from here though. After Hartside, the route passes close to Alston, reaching Garrigill and the old lead mining areas at Nenthead and Allenheads, reaching the highest part of the C2C at 609 metres on Black Hill.

This section marks the end of the rough hilly terrain of the North Pennines and the start of the industrial landscape of the North East. The traffic-free Waskerley Way has impressive sweeping views of the moorland before leading to the impressive Hownsgill viaduct and then onto Consett.

For most of this section, the Consett and Sunderland railway path is flat and easy to follow. There's much to see, with a varied mix of trailside sculptures, and possible visits to local attractions if you wish. The fine views across the River Wear continue as you enter the city of Sunderland and follow the water's edge to the route's official end at the Star Map sculpture along the seafront at Roker.