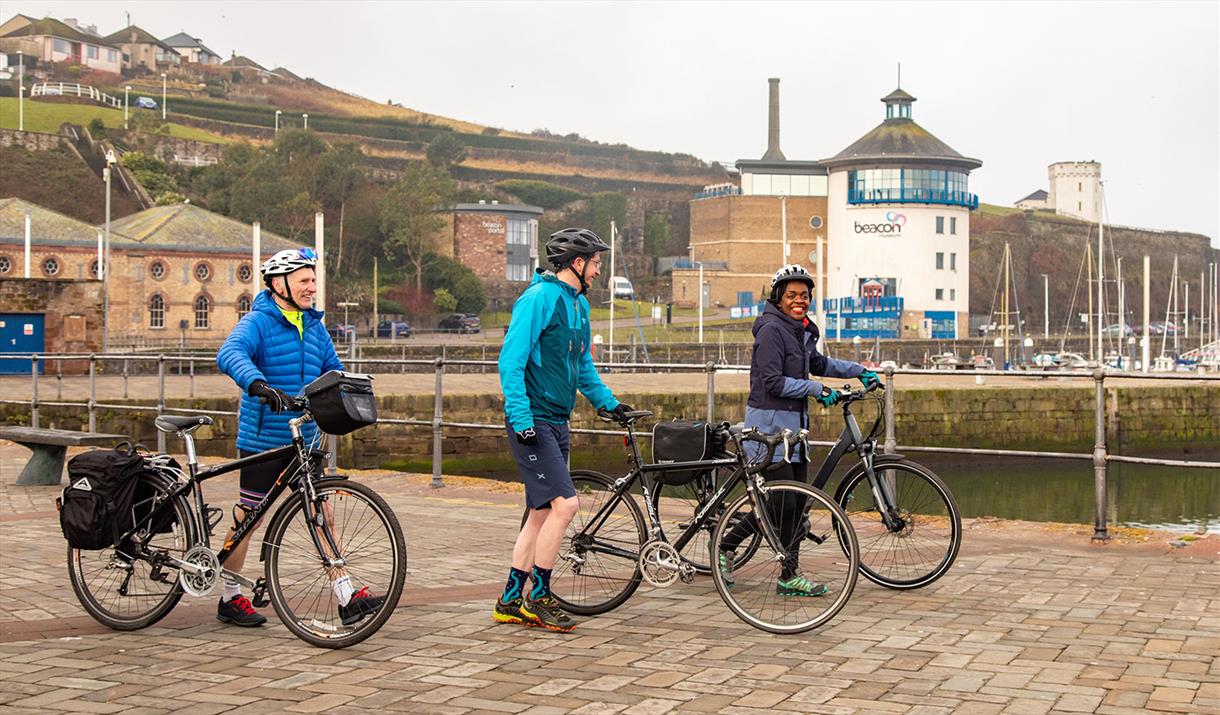 The 174 mile Hadrian's Cycleway snakes through the entire World Heritage Site. It's a cycleway that knits together existing shorter cycle routes, quiet roads and off-road tracks. Clearly signposted, the Cycleway takes you near many major Roman sites and other attractions are just a short turn of the wheel from the main route. As well as magnificent coastal views and breathtaking countryside you’ll see the famous wall itself, Roman forts and museums, quaint villages and attractive market towns, all set in a World Heritage Site.

The cycleway takes you on a ride through some of England’s most wild and dramatic countryside, following the line of the Roman frontier for 174 miles (280 kilometres) from Ravenglass in Cumbria to South Shields in Tyne & Wear.

Along the way you’ll take in superb coastal views, breathtaking countryside, an array of Roman forts and museums, some inspiring modern attractions, pretty villages and attractive market towns, all set in a World Heritage Site. This cycle route really does have it all.

You begin Hadrian’s Cycleway at the Glannaventa Roman Bath House, a short ride or walk from Ravenglass on Cumbria's coast. The route passes Ravenglass station and crosses the estuary on the railway bridge. From here you will travel on mainly quiet roads and off-road paths through the villages of Holmrook, Drigg and Seascale, then past Sellafield nuclear site before turning away from the coast towards the small town of Egremont.

Further on you will join the Sea to Sea (C2C) Route 71 and the Tracks of the Ironmasters which will take you into Whitehaven.

The whole route, from Ravenglass in Cumbria to South Shields in Tyne & Wear, is 174 miles (280 km). Most people are able to complete the route in 3 days, but for those wanting to stop at the numerous attractions along the way, it is likely to take 4-5 days. Please note there are sections of the Hadrian's Cycleway route that are not part of the National Cycle Network.

The route is a mixture of on-road and traffic-free sections.

It runs mainly on country lanes and quiet roads, interspersed with sections of traffic-free path, promenade and riverside path.

As most of the route is either on minor roads or well surfaced off-road tracks most bikes are suitable. All tyres apart from full slick or racing bike tyres are suitable. The coastal sections at either end of the route are relatively flat, but there are a few steep, short hills in the central section.

Sections of the route travelling West to East

From Whitehaven you continue on a mixture of quiet roads and off-road paths, passing through the towns of Workington and Maryport, where you can visit the Senhouse Roman Museum, and then the small coastal resort of Allonby.

The section between Maryport and Allonby provides great off-road cycling with beautiful views out across the Solway Firth.

Cycle hire for all types of cyclist is available at Solway Cycle Hire in Allonby for those who would like to stay in the area.

At Silloth the routes heads away from the coast for a while taking you down quiet roads through the north Cumbrian countryside, before joining the Solway coast at Anthorn with spectacular views across to Scotland.

The route goes past the RSPB Campfield Marsh reserve and just beyond this you will come to Bowness-on-Solway and the start of Hadrian’s Wall.

The cycleway now follows the route of Hadrian’s Wall taking you into the centre of Carlisle. If you are stopping in Carlisle then a visit to Carlisle Castle is recommended.

Heading towards Haltwhistle and Hexham from Carlisle sees the end of the flat, low lying terrain along the west Cumbrian coastal plain, with some hills to tackle as you make your way across the North Pennines. However, there are plenty of reasons to stop and explore.  Between Brampton and Gilsland you pass Lanercost Priory and a little further on near Greenhead you can visit both Thirlwall Castle and Walltown Roman Army Museum. Roman attractions are numerous along this section with visits to Birdoswald Roman Fort, Housesteads Roman Fort and Vindolanda all possible.

It’s downhill almost all the way now, with Hadrian’s Cycleway taking you from Hexham along the Tyne Valley and into Newcastle. Finish your ride at the Roman Arbeia Gatehouse in South Shields or take an alternative route to Tynemouth and Tynemouth Castle.